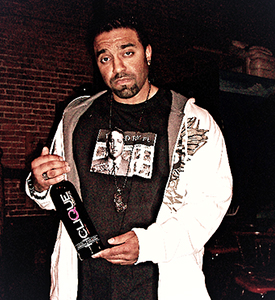 Born in Harlem and raised in the Bronx, he was no stranger to hard times. Growing up in New Yorkâ€™s poorest borough, during the eighties, when crime and drugs were ramped, he had dreams of making it out the hood and becoming an artist. But, as times got harder, and the desire for nice things amplified, those dreams would deteriorate. After witnessing firsthand the effects of drugs and what fast money could bring, he would begin the life that imprisoned his brother and captured and eradicated many of his friends. After relocating in search of greener pastures, he only found himself deeper in a life of transgression. By the age of seventeen he had dropped out of high school and would have the first of many court appearances. Fully fledged in a life of crime and on his way to becoming a major player in thedrug game, he was finally getting a taste of what he always wanted: THE AMERICAN DREAM. While hustling on the corner, he would listen to rappers from the neighborhood spit their rhymes. One day he decided to join in. Soon after, a cipher with friends shined a new light on a hidden talent: Rappin. After getting good feedback about his rhymes; he began writing songs with his friends. Still hustlinâ€™ fulltime, he began pursuing music in his spare time. He spit bars for several independent CEOâ€™S only to get turn down. Not wanting to take no for an answer, he began writing rhymes for a solo mixtape. During the making of the mixtape, he was not able to turn his back on the street life. This caused his future to once again be in jeopardy. The construction of the mixtape would come to a standstill after he caught a case. With the odds stacked against him, and the possibility of a jail time becoming evident. He began to question: Was it all worth it? After weighing his options prison, death, or rappin; he made his decision. It was a well fought battle, and he went on to beat the case. In 2005, Hustle Muzik Vol.1 was released with his M.O.B. Style Mafia crew riding shotgun. The mixtape gave him a buzz in the street with his distinctive voice and laid back style. This began to draw a comparison to some industry vets. He later went on to host his own Internet radio show titled M.O.B. Style Radio. The show helped him network deeper in the game. Between 2005 and 2006 he appeared on several independent artist projects lending his lyrical skills.In 2006, he released Hustle Muzik Vol.2 – Back 2 the Benches hosted by DJ Kool Kid -The HOOD Legend. In 2007, he brought a long time idea to life by starting his own label Gangstatainment Inc. In 2008, he introduced his label to the rap world with the released of Industry Shakedown – The Mixtape Album hosted by Blackwall Streets own DJ L-GEE. This gave him an even bigger buzz and assisted him in becoming a featured artist.He followed that up with the release of 3 The Hard Way hosted by DJ Hurricane and DJ Scratchez, in which he appeared along side Cassidy and Fabolous, proving that he could hold his own against industry heavy weights. The mixtape received an 8 out of 10 in its review.In 2012, he made the BIGGEST statement with the release of his new mixtape Fuck Everybody P.S. Thanks For Not Helping hosted by DJ Quinn. The mixtape was titled for everyone that doubted and tried to hold him back during his career. With well known sponsors Co-Signing the project it is nothing short of a CLASSIC.He is now five mixtapes in and counting. With the street life behind him, G.O.D. is FOCUSed with his sights set on making it in the music business. He is here to prove that his skills nor his borough WILL NOT be slept on. The only thing that can stop him NOW is G.O.D.